While I still had Buddha and Chou, I obtained a bitch, CH Dianspeed’s Shao Mei Li UD (Mei Li), from my good friend, and a breeder of lovely Pekes in the 1970s, Candace McCall. Mei Li also became an American/Canadian Champion and American/Canadian CD. She became my first Pekingese to earn an AKC Utility Dog obedience title. I believe she was the first Pekingese to be both an AKC Champion and an AKC Utility Dog.

I kept Mei Li’s son from her first litter–Dianspeed’s Ch’in Ai Fo CDX; he became an American/Canadian CDX. Mei Li’s daughter from her second and last litter (Dianspeed’s Li Mei Lien CDX) became a Canadian Champion and earned an AKC CDX obedience title. She was bred once and her two puppies also earned AKC obedience titles. Her daughter, Dianspeed’s Hsiu Li Su Lan CD, earned a CD and retired from the obedience ring–it was not her thing. Her son, CH Dianspeed’s Wang Li T’ai Tzu UD (T’ai) became and AKC champion and then went on to earn his UD title, like his grandmother. I believe he was just the second Pekingese to earn both an AKC Championship and Utility Dog title.

There are currently three Pekes in residence: CH Muhlin Holly Go Notso Lightly CD RN (Holly), her son, Dianspeed’s Muhlin Mischief CD RN (Tiger), and her daughter Dianspeed’s Delight (Mei Mei), who is only a year old and has not begun her obedience career. Although I don’t know how far Holly will go in the obedience ring–she is not thrilled with it–I believe she will at least earn her RE (Rally Excellent) title. Tiger, unlike his mother, seems to have fun with obedience and Rally and he has the potential to do very well. I hope he will go far. The future of Mei Mei, who hasn’t had any formal obedience training yet, in the obedience and rally rings is yet to be determined. Hopefully, she will be a good worker like her brother and do well in performance events. But our immediate goal is for her to pick up her second major and finish her AKC championship. 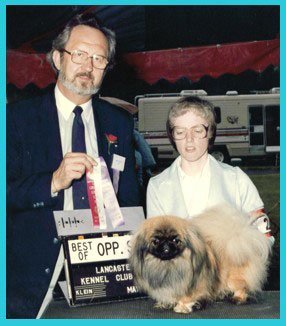 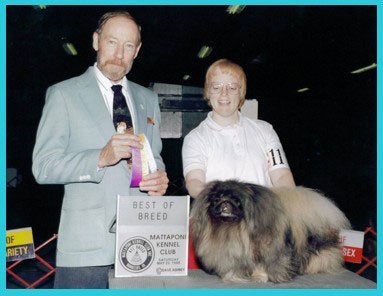