Historical Overview of The Pekingese Club of America

The Pekingese made its first appearance outside of 19th century China when five Sleeve Pekes between 3-6 pounds were brought to England from Beijing (then Peking) in 1860 following the storming of the Imperial Summer  Palace in Beijing by British and French soldiers. In those days the breed was known as Pekingese Spaniels, as well as, "Sun Dogs" "Lion Dogs" and "Pekingese Pugs".

Pekingese were first classified in England in 1898 together with Japanese Chin which were called "Japanese Spaniels" then and until 1977. In the late 1800's and early 1900's the two breeds were very similar in appearance with Chins tending to breed true as opposed to the Pekingese which did not. Since that time. Chins have remained virtually unchanged while Pekingese have, of course, changed quite radically in appearance -- but not character. 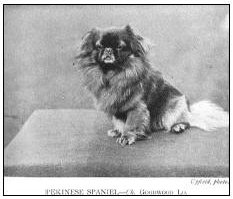 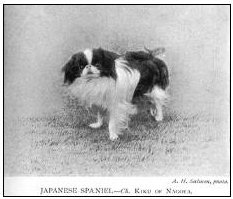 Forty-one years after the breed's appearance in England, a Peke was shown in Philadelphia by Mrs. George Thomas, and the breed immediately endeared itself to prominent exhibitors, as it has ever since.

In 1907, AKC officially recognized Pekingese. Two years before that, a Peke male who would become the first AKC Champion, Ch. Tsang of Downshire, was first shown at Cedarhurst, Long Island, owned by a British immigrant, Mrs. Mabel Mandy, a founding member and the first President of The Pekingese Club of America (PCA). 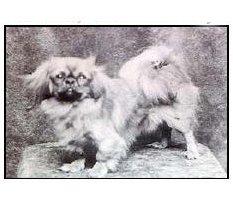 Through the years, Pekingese have been one of the Top Toys, with four Westminster Best In Show winners.  Ch. Chik T'Sun of Caversham  became #1 All Breeds in 1960 followed by Ch. Yakee If Only in 2005. 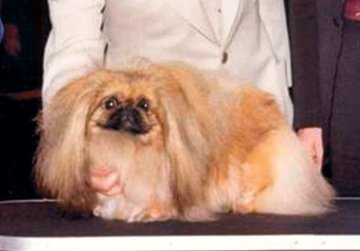 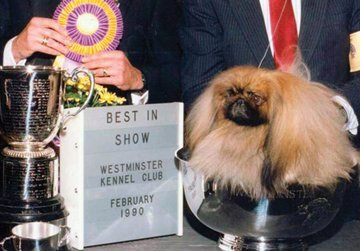 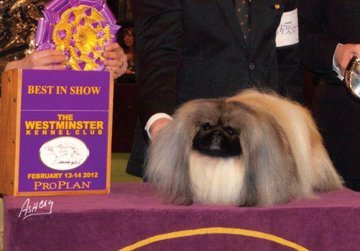 Along with Mrs. Mandy, was a group of socialites from New York City area who formed PCA on May 1st, 1909 in the Manhattan law offices of one of the club founders, Mr. M.E. Harby, Esq., who was also the Club's first Show Chairman and whose wife was also a PCA director and top breeder of Pekingese.

There were 16 founders, all from New York, except Margaret Barron of San Francisco. 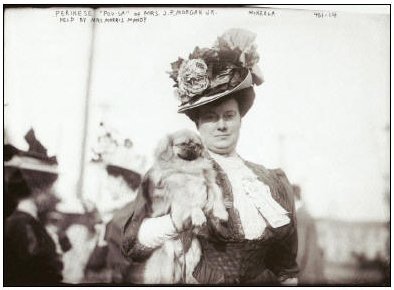 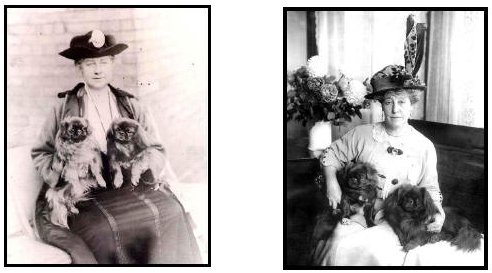 In addition, though not club founders, two of PCA's early patrons were Lady Algemon Gordon Lennox. a breed pioneer and visionary in the UK. and famed financier John Pierpont Morgan, a noted sportsman in many breeds, who became the Honorary President of The Pekingese Club of America and Vice Chairman of the Peking Palace Dog Association in Britain. 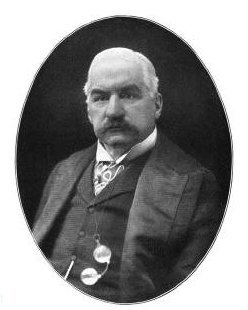 The Club still offers Mr. Morgan's perpetual trophy at its specialty in Manhattan, originally offered for Best of Breed and now offered for Best of Opposite Sex. Morgan's sterling silver trophy is housed at AKC Headquarters in New York. It's on permanent display there. along with PCA's  prestigious English-made Lasca McClure Halley Trophy. One of the largest in the sport, donated in 1929 by prominent handler Mr. McClure Halley, in memory of his late wife, Lasca, who was a judge and a PCA Director in the 1920's. These distinguished sterling silver PCA trophies, appraised in 2008 and said to be "worth a fortune", remain a symbol of The Pekingese Club of America's respected heritage. 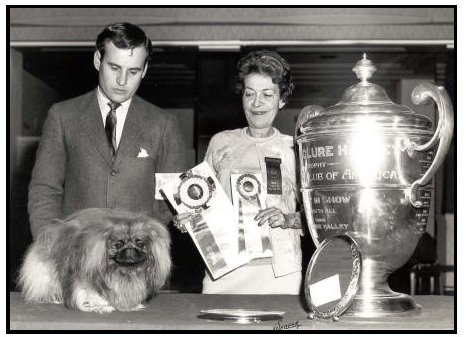 Although the first Chinese imports to England weighed between 3-9 pounds, the British and American parent clubs established an 18-pound weight limit to accommodate the breed's burgeoning popularity and encourage participation by more exhibitors. That brought opposition from the breed purist founders who successfully forced the weight limit back down, initially to 10 pounds (by forming a new club - the Pekin Palace dog Association). But the British parent club, The Pekingese Club, eventually compromised to 14 pounds which became the limit in the AKC standard (which added a disqualification over 14 pounds). The British later amended their standard to read "ideal weight not to exceed 11 pounds for dogs and 12 pounds for bitches", which is current.

The Club's inaugural specialty show was a society event held on January 18. 1911. in the ballroom of Manhattan's Plaza Hotel. The judge was club founder Mrs Benjamin (Bridget) Guinness of Washington Square 111 Greenwich village. Mrs. Guinness wore long white gloves and sat on a chair while all the dogs were brought to her one-by-one. Her Breed winner was Tsang of Downshire (photo above), winner of the Open Dogs under 8  pounds class. Best of Opposite Sex went to Ch. Broadoak Fatima. owned by Mrs. Paul Sorg. Listed in the show catalog that year was a back bitch owned by Dr. Mary Cotton, as follows:  "Chaou Ching-Ue. September 15, 1902, Breeder, the late Dowager Empress of China. Pedigree Unknown". The Empress is credited with writing the original breed standard on which the British and American standards were based. She offered a silver cup as trophy at PCA's first specialties. 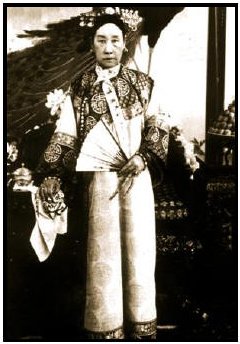 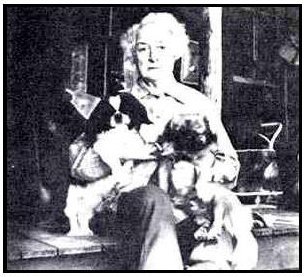 Since then, PCA has held annual specialties in Manhattan, moving to back-to-back spring specialties in upstate New York in 2010. The PCA also had a summer show tradition beginning consecutively. Mr. John B. Royce and Kay Jeffords are among the other notable breeder-exhibitors whose dogs have won Best of Breed at PCA's Manhattan show before the "American Breds Only" restriction was lifted in 1992.

Looking back on the Club's distinguished history, among the devoted individuals who have shaped the progress of The Pekingese Club of
America is Mrs. Michael M. Van Beuren of New York and Newport, Rhode Island, who served as President for 40 years beginning in 1913.

As a point of interest Mrs Van Beuren often traveled to Europe with her Pekingese in a velvet-lined box which  accompanied her personally on the journey. Architects designed her picturesque kennel 10 be a replica of her main  residence at her Newport estate.

Mrs. Van Beuren left a token of her dedication to PCA with a challenge trophy donated in 1945. a sterling silver cup for Winners Dog. Red or Red/sable shown by the breeder/owner, which was not retired until 2000, and a Tiffany water pitcher for Best of Breed if under 8 pounds which is still offered today. 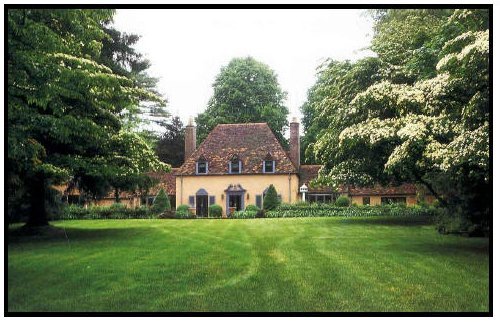 Mrs Van Beuren's Kennel - a replica of her Newport home.

Mrs. Van Beuren was succeeded as President by Miss Clara Lowther, followed by Dr. E. R. Blamey, for 25 years and Mrs. Geraldine Hess in 1977. Other early notables in the club include Mr. and Mrs. Herbert Mapes of the successful Whitworth kennels, whose niece, Mrs. Fortune (Mary Lou) Roberts, became one of the respected doyens of PCA and a Vice President through the 1970's-80's.

One of the most notable driving forces behind PCA since 1950 was Miss Iris de la Torre Bueno, a breeder-exhibitor of Brussels Griffons, who served as PCA Secretary for 49 consecutive years until her death in Manhattan just prior t0 the 1989 PCA Spring Specialty. Iris' mother, Celia Bueno, was also one of PCA's Board of Governors, who together with Iris owned the All-Celia Kennels of Griffs and Pekes.

Throughout Ms. de la Torre Bueno's tenure, PCA's Specialties were held in New York City at various hotels including The Roosevelt, The Hotel Pennsylvania, The Loew's Summit, The Skyline on 10th Avenue as well as a hotel in New Rochelle in the 1940's.

PCA's 75-year tradition of Northeast Specialties gave way to the annual rotating specialty (now the National) which began in 1991 as a 2-3 day event. In December 2009, the club celebrated its Centennial year with the National in Indianapolis.

At these historic shows the club re-introduced Junior Showmanship which had been missing from PCA events for over 50 years, thus re-establishing PCA's commitment to development of future Pekingese handlers as well as the breed's future. 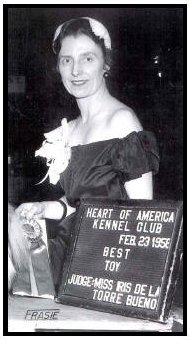