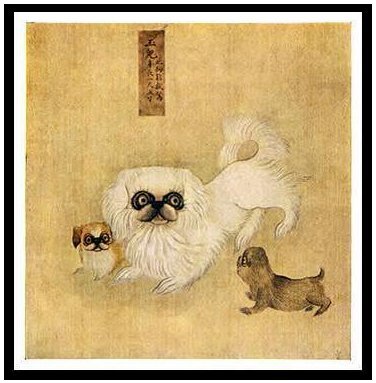 Exactly when the old “Tibetan Spaniel” type Pekingese emerged is lost in antiquity, but historians trace a short muzzle dog in China back to 200 BC. It is likely that Pekingese descended from early Maltese obtained from Muslim traders in China and that all Chinese toy dogs go back to those imports.

Around 800 AD, the breeding of toy dogs escalated in China, but was replaced by a predominance of cat breeding from 1368-1628. During the Manchurian rule
of Beijing (then Peking) from 1644 -1911, Pekingese and sleeve dogs became objects of trade with the Europeans. Pekingese with black-spotted tongues were a particular favorite in Europe.
How to have more strength in the legs in bodybuilding? sibutramine buy testosterone bodybuilding injection, steroid buy belgium mornilufer.
Chinese breeders wanted Pekingese attributes to conform to aspects of Buddhist teachings and art. That’s why a Fu Dog is associated with Pekingese, bearing in mind that the Chinese refer to the Fu Dog as “a lion.” In Chinese mythology, the Pekingese is said to be a cross between a lion and a tiny monkey (marmoset) and one can see how the myth prevails to this day. Small size and special markings were the highest valued traits, and the 4-5 pound “sleeve” Pekes with ferocious temperaments served as guard dogs which were concealed in the large sleeves of garments: “a surprise” that was literally “up one’s sleeve.”

In the 19th century, and no doubt earlier, Pekingese produced in rough and smooth coat varieties with the latter known as “Happa Dogs.” Through the free exchange of breeds in the palaces and monasteries in 17th to 19th century China and Tibet, Pekingese evolved and were crossed with every kind of dog known at that time: rough and smooth coated Pugs, Japanese Chin, Tibetan Spaniels, Lhasa Apsos, Shih Tzu, Tibetan Terriers, Chow Chows and other developing breeds.

By 1821 the breeding toy dogs in the Imperial kennels reached its height. The best dogs were painted by court artists in the Imperial dog books (as seen above) which served as the early Chinese equivalent of a pedigree.

Eunuchs regularly sold dogs at monthly street fairs, but Pekingese had become a passion of the Chinese Emperors and courtiers and the best ones were extremely guarded. Anyone caught smuggling one for sale suffered ruthless punishment by torture. Some Pekingese were given as gifts to visiting dignitaries, including Alice Roosevelt (daughter of President Theodore) and J.P. Morgan. The first five Pekingese exports to England were literally loot taken in 1860 during the French and British storming of the Imperial Summer Palace in Beijing. Those five Pekingese were known to be sleeve size (6 pounds and under) and this marked the breed’s beginnings in Western culture.