Purpose of the Breed

Though the Pekingese was developed as a companion dog, it was originally bred in China specifically as an ornamental accessory for Emperors and courtiers in the Forbidden City of Imperial China as well as a personal guard dog. The smaller ones, that is. The smallest ferocious ones, called “Sleeves,” were carried in the large sleeves of garments and served as the ancient Chinese version of mace to defend and scare off anyone threatening the courtiers.

The ancient Chinese standard refers to Pekingese having specific colors to match certain wardrobes. This suggests that Pekingese were literally an extravagant fashion accessory in a society and culture known for exotic excesses and lavishness. 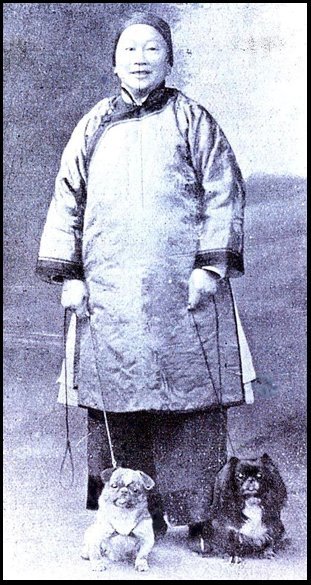 Photo: Two Pekingese imported to England from Bejing, about 1905. Black Pekes were the favorite of the Dowager Empress.